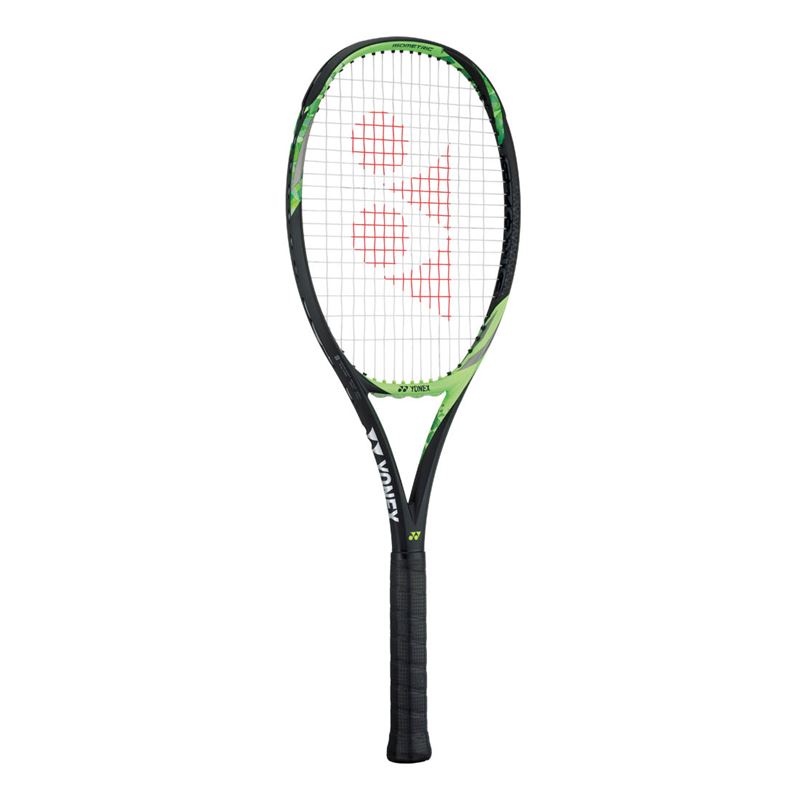 YONEX EZONE 100 (300g) GREEN PERFORMANCE TENNIS RACQUET The Yonex EZONE 100 (300g) Green Performance Tennis Racquet is a medium-thick beamed frame (24mm/26mm/22mm) geared towards beginner to intermediate players with an already competent game, who are looking for a stick that soaks up unwanted vibrations and shock.  It provides access to ample spin and a pretty fair amount of power (Rule of Thumb: thicker the beam, more power the racquet will provide), while still maintaining control on groundstrokes and volleys. It also comes loaded with technologies that will be discussed in-depth below. The strung weight of the EZONE 100 (300g) is 11.2 ounces, and the heft and rather stiff (68) frame, gives it great plow-through on offcentered shots not in the sweetspot.  This means you will get a more predictable trajection on your shots, even when you do not line up the ball perfectly. This is especially important for players whose footwork does not always cooperate, and find themselves out of position at times. Please note, stiffer frames can sometimes exacerbate arm issues, but the added technologies more than cancel this out with the EZONE 100 (300g). The 27 inch length of frame, 321 point swingweight, and 4 point head light balance provide plenty of stability, while giving the head a rather light feel to it.  This helps when whipping the head 'through the zone' and imparting ample spin when necessary.  The spin-friendly 16x19 string pattern means there are larger squares in the string bed, allowing more of the ball to be gripped, which 'bites' into it when brushing up and imparting heavy, heavy topspin. The wider range of string tension than on most frames, 45 to 60 pounds, gives the player more variance on whether or not they need more power and spin, or more control.  The rule of thumb is the stringbed works like a trampoline, and the lower tensions allow the strings to bend more, which slingshots the ball forward - just like a trampoline.  The lower tensions allow the cross strings more movement, and the resulting snapback propels the strings upward on whippy shots, and this imparts even more spin. Tighter stringbeds, conversely, have more control and tend to keep the ball inside the baseline, even on imperfect swings and volleys - do not swing on your volleys - just punch! This racquet performs best in the hands of beginner to intermediate to players with medium-full strokes. (See Specifications tab for de

What to know about 2022's HBCU national tennis championships

The 21st annual HBCU National Tennis Championships are from Sept. 15-18, 2022, at the South Fulton Tennis Center in the far stretches of Atlanta, Georgia. Heres what you need to know....
>Read More

The NCAA Division I Mens Tennis Subcommittee has revealed the teams for the 2022 DI mens tennis championship. ...
>Read More

Any/all of the links on this website are affiliate links of which naturallysports.com receives a small commission from sales of certain items - but the price is the same for you.